Editor’s note: to get our new blog going, we’re importing articles we’ve written in the past about our sailing adventures together. This article was written in May of 2013 after the Annapolis to St. Michael’s race. 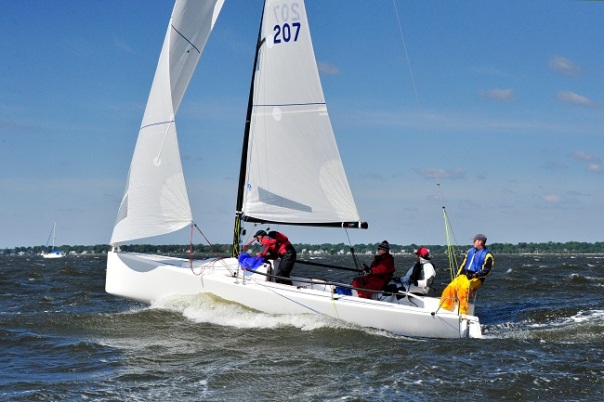 Time has a funny way of masking experiences, but even making allowances for the muddling of memories, the four of us struggled mightily Saturday afternoon to recall ever having had a sailing experience as exhilarating as the sleigh ride down the bay we had just enjoyed in the Annapolis to Miles River Race.

As early as mid week we’d had reason to believe we were going to have all the breeze we could ever want from exactly the right direction (northwest) for the race. In fact, some late week forecasts predicted gusts to 40 knots. Our skipper Erik polled the group to be sure we wanted to sail, and after each of us (Brian, yours truly, and my wife Lisa) unanimously replied that we did, we made plans to accommodate the unusual conditions. We planned to pack plenty of sail ties in case the wind really did prove to be unmanageable under full sail (40 knots would certainly qualify) so we could douse and lash down the main, then made arrangements to bring a trailer and tow vehicle to the Miles River Yacht Club so we could haul out at the end of the race and trailer the boat home, thus avoiding the need to beat our brains out trying to sail the boat back upwind on Sunday. For good measure, we packed bags of warm, dry clothes so we could change after what would undoubtedly be a wet couple of hours Saturday morning. Then we enjoyed a nice dinner while trying to contain our excitement every time we ventured outside and heard the wind whistling through the trees.

Saturday morning saw us make our first and most significant mistake of the race: we left the dock too late to make the starting line on time. In an attempt to get caught up, we tried our first spinnaker set after getting clear of the harbor and learned the first of the days’ tough big-breeze spinnaker lessons: after a brief period of blast reaching, we sailed too low and allowed the spinnaker to collapse amid the turbulence left by the jib and main. The first time we did this we were able to fill it again by gently heading up, but the second time it happened we broached hopelessly when the spinnaker filled and flogged on our side for a long time before concluding that we could not right the boat without dropping the spinnaker. We hauled on the lazy sheet, then doused the halyard and brought the chute down on the windward (starboard) side. We did what we could to make the start under jib and main while trying to clean up the spinnaker lines but by the time we crossed the line we’d already spotted the competition 8-10 minutes and could see them well down the course with their chutes filled. For our own part, we still had several more minutes of cleanup before the chute could be re connected and set. For the race result anyway, it was game, set, match.

No matter. It’s impossible to say how we would have finished had we started on time, but the odds are we wouldn’t have recalled our finishing results after a couple of weeks anyway. What we will always remember is the sail down. During our cleanup we’d encountered some unbelievably strong puffs – strong enough to easily plane the boat even without the spinnaker flying. Once we cleared the lines for a re set, we briefly debated whether to set at all, but I pointed out that we were there to do exactly that – to push the boat and ourselves, and to have this experience. So we set. What followed can’t really be put into words for those who haven’t experienced it. It couldn’t be put on film either, since there wasn’t any hope of getting an iPhone on deck without drowning it in the spray. The J/70 is absolutely wicked sailing in those conditions (25 knots with higher puffs). It sticks its nose up and goes blasting through the waves, punching through the tops of many of them and sending sheets of water aft long the decks into the spinnaker trimmer (yours truly, in this case). Other times, it would punch its nose right into the back of a wave and slow dangerously, loading up the rig and inviting an ugly broach as the apparent wind spiked upward. The rest of the time it’s just blasting downwind at ludicrous speeds and shooting spray everywhere. We saw a peak of 17.5 knots of boatspeed and spent the vast majority of our time in the 15-16 knot range.

We spent some time on our side with the sails flogging too during our multiple wipeouts. But we learned, and we found ourselves doing a better job at balancing the boat on the knife’s edge during the race. By the end of the two hours (!) it took us to do the 17 mile race, we measurably improved our heavy air boat handling and were seeing fewer and fewer spinouts.

Our biggest learning was that boatspeed needs to be kept up at all costs in these conditions. In the lulls, we learned to head the boat up so that when the puffs hit the apparent wind was manageable. Slow down too much and the big gusts would take us out every time. At the race party Ray Wulff (who won the race and avoided even a single wipeout) gave us more tips for making it through the waves next time without punching the bow through them.

Below: Ray planes down the bay to score a perfect win. Photo Credit: Spinsheet Magazine. 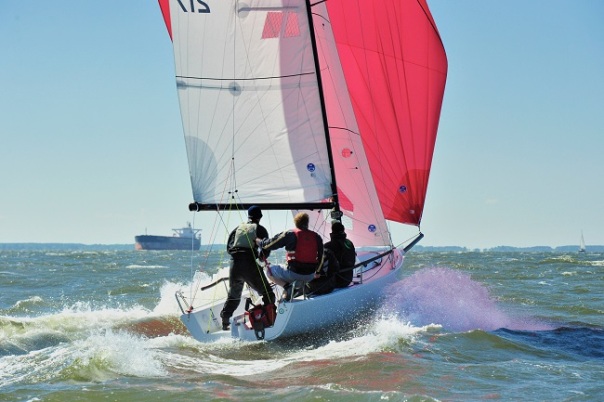 In the end we had an experience none of us will ever forget. We each struggled to remember a sail as epic. For my own part, the closest thing might be planing my J/29 in 30 knots of wind during a race in 2000, but getting a boat that big and heavy to plane brings about no small amount of stress to accompany the exhilaration. The only other experience in my memory that could rival it would be blast reaching a Topper Topaz in Antigua under spinnaker, but the J/70 has it beat. For one thing the Topaz is only a dinghy, and there is something altogether more dramatic about blasting along at these speeds in a 23 foot long keelboat. But the biggest difference is that the J/70 just goes faster and faster with each puff. The Topaz had a definite redline of apparent wind where it would just load up and wipe out. Sail it long enough and it got a bit frustrating, because you always want more, more more, in big breeze. The J/70 delivers more – when you do your part and keep it upright.

I for one can’t wait for the next distance race and can only hope that lightning will strike twice and give us another stout northerly. I want to do this again!