There’s a dirty little [not such a] secret that sailboat cruisers eventually will uncover during their travels: many marinas – and their fuel docks especially – don’t like us. At all.

Fuel docks only have so much water front footage, and given their druthers the operators want to be pumping as much revenue producing dyno-juice as they can every minute of the day. When they see a nice big power boat pull up along side they can be sure they’re about to generate a sum of revenue with a comma in it. By contrast, sailboats hold and consume a tiny fraction of a power boat’s fuel, and sailboats like to tie up the fuel dock filling water for free only to buy 20 gallons or less of diesel. By the time we were preparing to leave Nantucket I’d already overheard a marina manager at a different marina growling rudely over the radio about “that sailboat that’s taking so long!” (a reference to us as we filled water, 10 gallons of diesel and 1 gallon of gas). A good friend of ours with a large power boat shared a hearsay story (relayed to him by a fuel dock operator while he took on hundreds of gallons of diesel) of gas dock operators falsely claiming to be out of diesel to shoo approaching sailboats away.

Nantucket is a scenic destination, but it also attracts a very high dollar clientele, many of whom arrive in massive power yachts. So when we pulled up at the fuel dock to fill water, we got some very cold treatment from the fuel dock operators, who said they did not offer water and shooed us to the town dock instead.  The town dock formed an imposing figure, as it was sized for large commercial fishing boats with only large truck tires hung out to protect topsides. It happened to be blowing 20 knots from the northeast that morning, so the town dock formed a lee shore. We had a scary landing on the dock only to find ourselves being beaten roughly against the pilings below the truck tires.  Before long we aborted the whole maneuver and were lucky to escape with  only very mild bruising having been done to the port side of Le Saberage. Oh well. Around Nantucket we were chump change and treated as such by their service docks, so it was on to the next destination.

Our sail to Edgartown found plenty of leftover chop from the morning’s winds but only a dying breeze with which to power us through it, so before long we gave up a difficult and not especially rewarding sail in favor of the diesel. 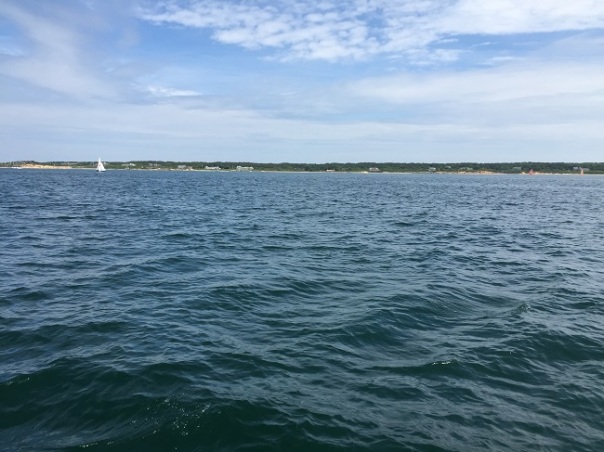 Edgartown was charming and by all appearances much more lightly visited by the billionaire set. We felt welcomed as we arrived and the long, winding, and very well protected anchorage, where a dedicated water dock (complete with park bench!!) had been set up for little guys like us. 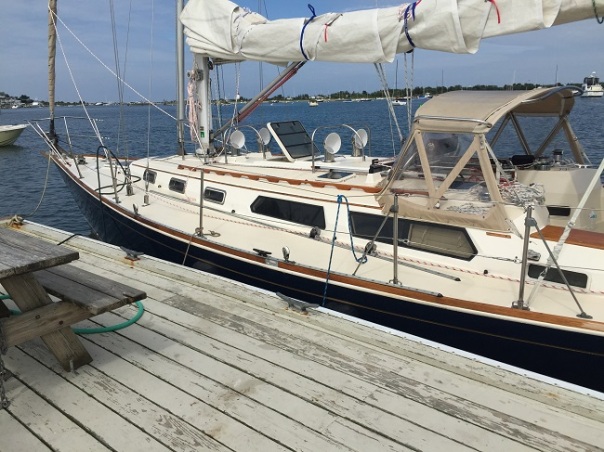 Ice cream, some light clothes shopping, and more scenic walks were all taken in during our visit to Edgartown, followed by a delightful dinner at the yacht club. Very nice.