It’s late August, and with our scheduled Newport-area cruises complete, we decided to start the trip home to Annapolis via a slow September cruise of Long Island Sound. As the first leg in the journey, I decided to work on building some new skills by making my first single-handed passage. Although I’ve done a fair amount of single-handed day sailing since we bought Le Saberage late last summer, single handed passage making would stretch a whole new set of muscles.

The passage proved to be an excellent test of all of the skills I am looking to build as a single-handler: mental and physical endurance, route planning (including critical timing of the tides for Long Island’s infamous eastern “Race”), piloting into unfamiliar ports, and of course handling anchors, sails and mechanical functions underway.

Careful review of Eldridge convinced me that my best approach for dealing with Long Island Sound currents would be to motor to Point Judith Friday evening after work so I would be 10 miles closer Saturday morning. I chose the Harbor of Refuge as my anchoring spot, which freed me from the travel time in and out of Point Judith proper. The motor down Friday was easy and peaceful, though it took the better part of 2.5 hours owing to foul currently leaving the Narragansett.

When I arrived I found 15-20 feet of water and anchored as close to the western breakwater as I deemed prudent. I quickly came to realize that a leftover ocean swell combines with large volumes of recreational and commercial fishing boat traffic to generate a ton of swell in Harbor of Refuge – swell that the degraded breakwater only partially stops.

Still, the site is so scenic and I found my visit there so exciting (what could feel more dramatic than anchoring in a ‘harbor of refuge’ while making one’s first single-handed passage?!?) that I decided the roll was totally worth it. Once night fell and a dazzling moon lit up the nearly desolate anchorage, I knew I was right. Listening to the waves crash on the rocks of the breakwater while enjoying the view (and a scotch), I couldn’t remember a more magical setting in my life. 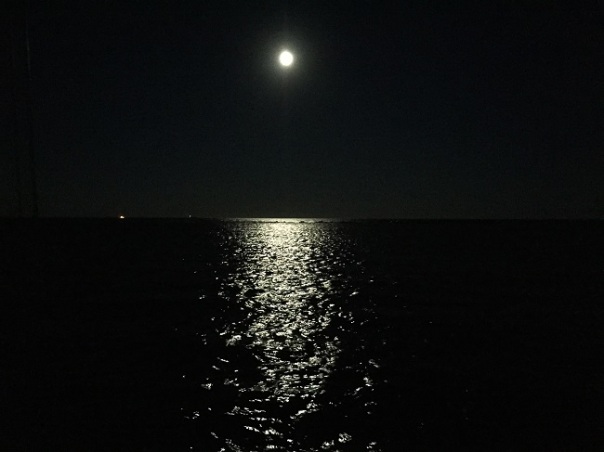 The night stayed relatively calm and I slept well. At my first nighttime potty break the GPS and a glance out the portholes showed all to be well, but at 3am pee time I was more concerned. The current had shifted, pointing Seb’s transom to the Western breakwater and bringing her closer to it than I liked. I briefly considered starting up and moving her further from the wall but decided instead to simply stand an anchor watch until first light, then depart on schedule at 5:45 or so. The anchor watch proved uneventful (thankfully), and it took a great deal of discipline to hold off on departure  until there was enough light to safely navigate. As Mother Nature had it, enough sunlight materialized for a departure exactly where Eldridge would have it for optimal Race timing: 5:45am. I watched the sun rise while motoring west and anxiously monitoring the speed-over-ground for signs of the current beginning to push.

As it happened, the current builds slowly and progressively up toward a knot or so until you get very close to the south side of Fisher’s Island and then, just as the charts predicted, you get flushed into The Race. I saw a peak of 11 knots over the ground (in a boat that cruises at 6.9 or so through the water) in The Race itself and enjoyed every bit of the promised 2 knot current for most of the trip West toward Duck Island, my target for Saturday afternoon. The currently only turned foul for the last hour or so of motoring, so my first experiment in timing the current worked out swimmingly.

Duck Island offers another “V” shaped breakwater for an anchorage, but the charts showed very shallow depths and I didn’t see any boats anchored behind the walls as I passed to the south. Confused, I decided to anchor near a separate breakwater to the west to have lunch, confer with a more experienced cruising colleague via Facebook, and generally weigh my options. It was pretty clear the spot I chose would never work overnight, and my colleague assured me that the correct anchorage was indeed behind the “V,” so I weighed anchor after my quick meal and carefully motored around to check out the other spot. 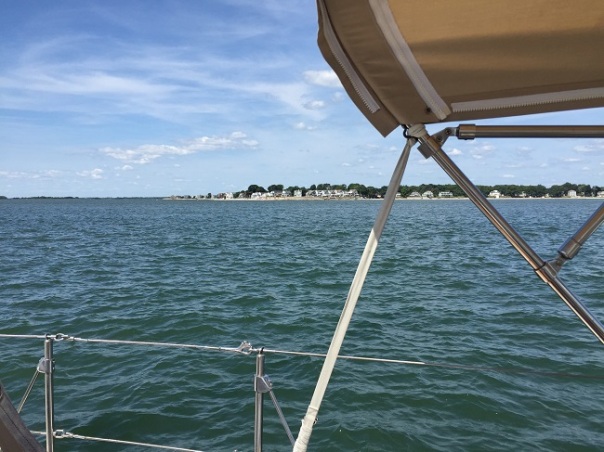 The trick turned out to be that only power boats have shallow enough draft to anchor in the “V” itself, while larger sailboats could simply pick a spot just outside the “V” that placed breakwater between themselves and the wind & seas. This I did – choosing a spot near the western breakwater that put the southern breakwater between me and the weather.

Duck Island Roads, as this anchorage is known, is a locale frequented by power boaters who come to drink, party and swim. It’s a cozy spot to drop the anchor, but expect your neighbors to shift the mood of the location significantly, even in spite of conditions as blissful as those I enjoyed Saturday evening. In the photo below, the Spring Break soundtrack can’t be heard, so the photo implies a mood very different than the actual experience was. 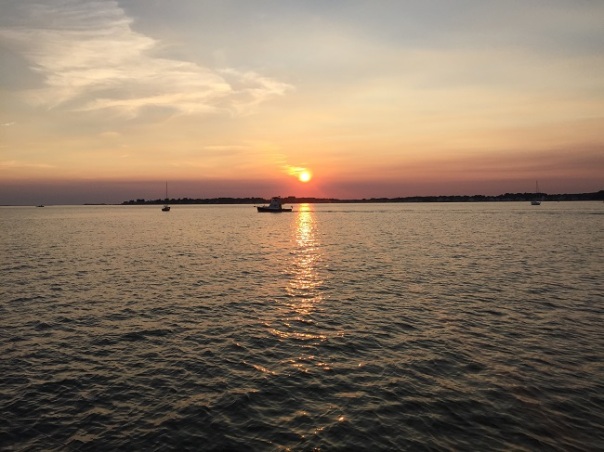 As a semi-related tangent, I’ve come to realize that not all power boaters are especially skilled nor prudent mariners. While preparing dinner I had to race on deck and prepare to fend off a large, drifting power boat that was bearing down on me while the skipper frantically tried to get its engines restarted. The boat had been anchored dead upwind of me since the early afternoon and its crew had made a particular spectacle of themselves by blaring loud music across the anchorage just after sunset and hooting and hollering to the night-club beat of their booming speakers. Now the skipper was frantically trying to keep the motors running long enough to back away from hitting me as he drifted downwind (he succeeded in getting them running just long enough before they stalled again) while trying to explain that the crisis was caused by his “anchor “los[ing ]power.” His nearly incomprehensible explanation continued and seemed to indicate that his house bank had died and the windlass had stopped with the anchor only half way up.

Baffled, I tried to reason through how this would cause the main engines to start and die intermittently while I watched him drift quickly toward the lee shore with all of the house lights blinking on and off periodically. I could only assume that they’d killed the house bank with the stereo and further that they must have begun weighing anchor before getting the main engines running. And beyond that I had to wonder if this particular boat had separate house and engine batteries and /  or whether the crew had adopted a habit of drawing house loads on the engine battery. But none that could begin to  explain why they couldn’t have simply dropped the anchor back down manually as soon as they realized they had electrical problems. Instead whatever systems issues had arisen had caused the lot of them to pretty much just start flailing and panicking while they blew downwind. It was amazing to witness, but not especially fun when lying at anchor in their lee.

I returned to my now burning chicken in the frying pan after verifying that no one else had anchored to weather of me. I didn’t care enough to see whether my uninvited visitors restored propulsion before drifting into the channel entrance that lay a half mile or so downwind. Other partiers eventually either passed out or departed and a blissfully calm night followed that required no standing anchor watch – just quick GPS and visual position checks at each night time pee break.

I awoke before dawn and verified that all was well in the heavens; the moon had indeed made its expected progress toward the other side of our globe and a faint glow on the horizon indicated that the sun was on schedule for its daily appearance. 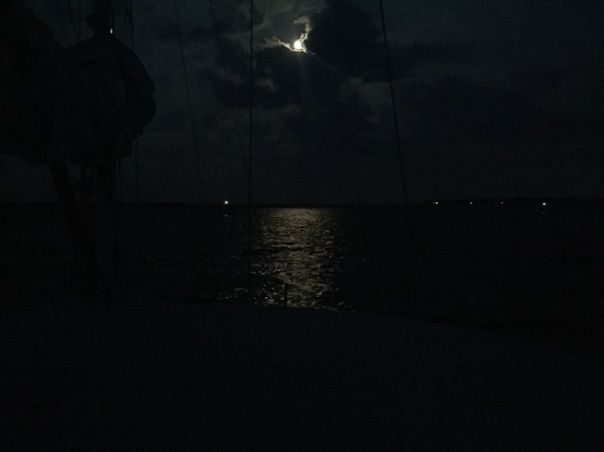 I weighed anchor in about 15 knots of breeze, which requires a bit of creative boat handling if one is to avoid the lee shore and still get the anchor washed and lashed down but all went smoothly and I set sail in about 19 knots apparent wind and a festive chop.

I bore off to starboard tack and enjoyed the sunrise with the entire Sound to myself.

My intended destination was Port Jefferson, which lay directly upwind 30 miles or so to my southwest. Beating uphill mean that at least one of my tacks could be timed to bring me within spitting distance of The Thimble Islands, so I called an audible and decided I’d make that my first stop of the day before continuing to Port Jefferson.

The sailing was beautiful…

…and as we’d noted sailing home from Block Island a couple of weeks before, a current against the wind can whip up quite a chop.

Despite calling a bad lay line trying to get around Falkner island (requiring two extra tacks),  I made steady progress up to the Thimble Islands. If anything they were even more beautiful and scenic than I remember them from childhood cruises. 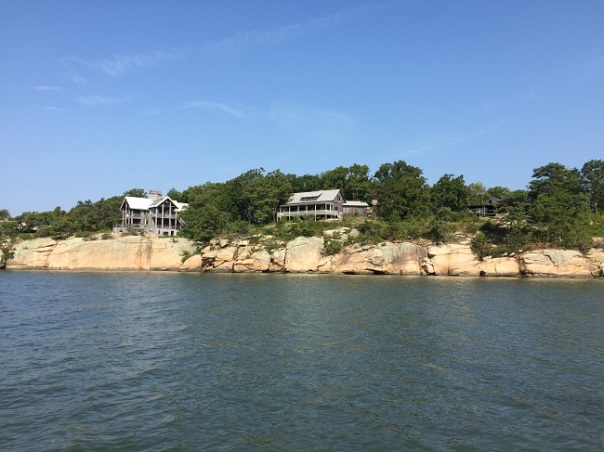 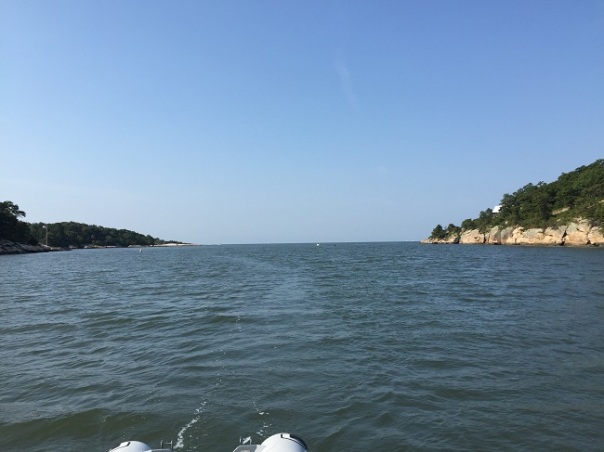 After my brief island tour I popped back out into the Sound to find only around 7 knots of wind remaining, dead on the bow on my intended course. I decided to begin motoring the 20 miles remaining to Port Jefferson. If the breeze built, I could always do a little sailing once I was closer to my destination. Alas, it was not to be. The breeze slowly died down until achieving a nearly perfect flat calm well short of my destination. One could hardly believe it was the same day on the Sound as it had been during my early- light sail. 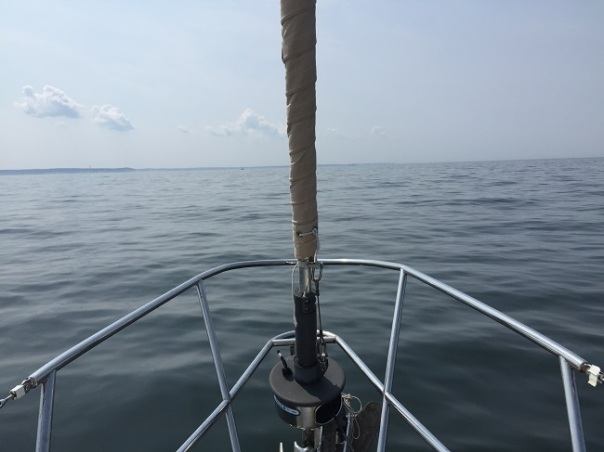 More happily, my timing of the currents proved to be a bullseye: I rode a slight push all the way to Port Jefferson and only encountered a slack tide as the channel marks came into view. 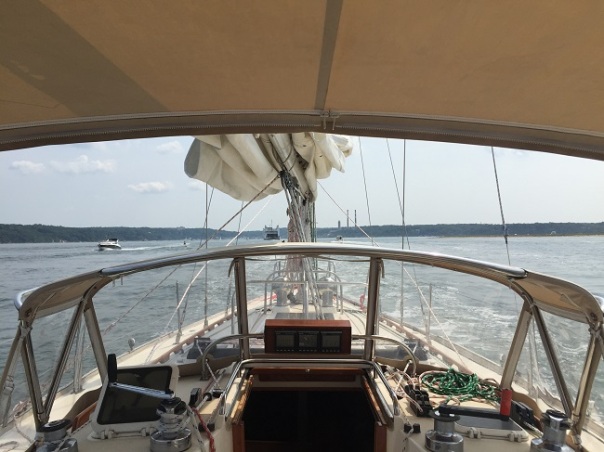 It was stifling hot as I picked up the mooring and began the passage cleanup, but a heat wave wasn’t going to quell my sense of satisfaction and accomplishment. My first single-handed passage under my belt and it had gone exactly as I’d hoped.