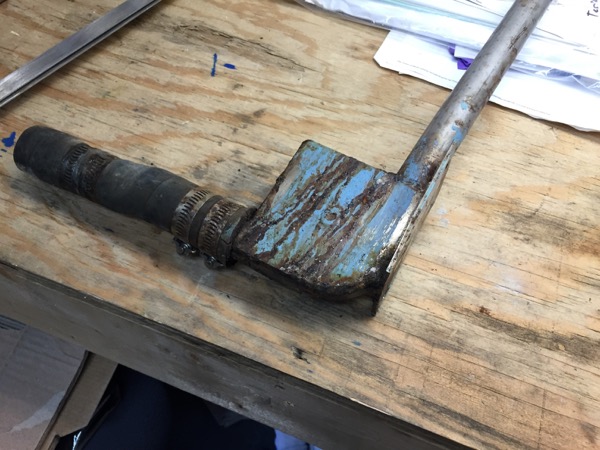 It’s vital for centerboard boat owners and crews to be fully aware of the location and nature of all components below the waterline – and for these components to be inspected regularly. Last summer when we hauled out to replace our broken centerboard cable, we got a look for the first time at the sheave box for the cable in the lazarette (pictured above) when it was removed as part of the cable replacement. Those brown streaks mean that some parts of the box had rusted completely through and begun to leak through pinholes – not good news given that this component lives below the water line! The rust wasn’t serious enough to be a risk to the boat in the immediate future, so we re installed it and made a note to remove it and have it repaired over the winter. I also noticed that a small section of rubber hose served as a coupler between the sheave box and the rest of the cable conduit, which is stainless steel. Though it was certainly due for replacement, the coupler didn’t look to be unsafe. Still, having seen both lazarette components I made a mental note for the coming winter to inspect the second (forward) sheave box where the cable exits the hull and its rubber coupler.

In recent weeks I got a start by removing the aft sheave box again and bringing it to a well respected local welder. In the photo below note the degree of corrosion and the shaky condition of the rubber coupler. The welder had me grind away the surface corrosion with a stainless steel brush before bringing it back to them for a thorough inspection. After pressure testing it, they confirmed that the box had been leaking at the welds, which were ground out and replaced. 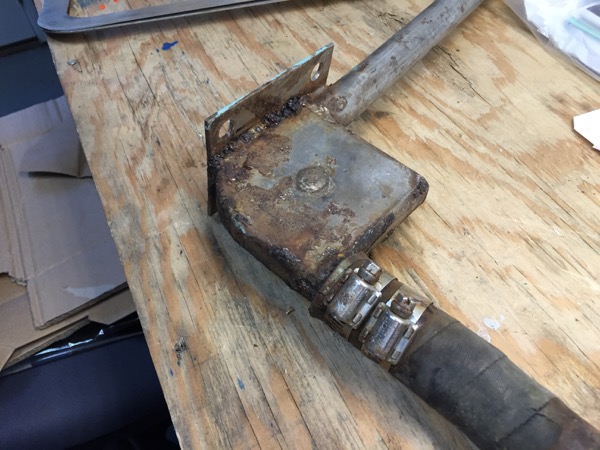 I got back a nice, shiny looking sheave box that had been pressure tested and found to be water tight. Much more confidence-inspiring.

Next I took off the cover to the engine box in our galley and used some brake cleaner to degrease and inspect the forward sheave box. The box itself turned out to be in excellent condition, exhibiting none of the rust the aft box had. I think that all of the oil I cleaned off from the bilge water had been protecting it all of these years!

Then it was on to removal of the rubber coupler. It turned out to be downright scary. The same oil that had protected this forward sheave box had been attacking the rubber of the coupler for just as long. In the photos below, the cuts along the length of the hose were made by me to remove it. The other damage is all deterioration. The hose clamps were equally scary; one of them snapped in half the moment my screw driver touched it. All of these components are in the very lowest part of the boat, well below the waterline. In other words, had any of them failed, we would have had a lot of water coming in without the ability to close a corresponding seacock. Not good. 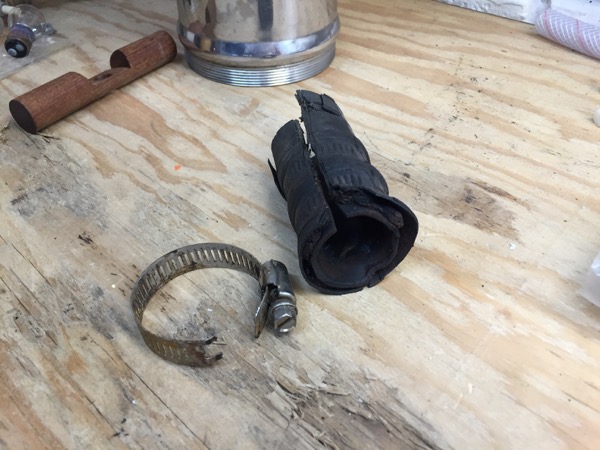 Our Sabre is made very well, and the materials used on all of these components are high quality (the welder was very impressed with the aft sheave box he worked on). But after 27 years, anything made of rubber or metal will deteriorate. My take aways from this experience? If your boat has a centerboard, be sure you know where all of the components of the cable conduit are and regularly inspect them.

And one other thing. Be sure those through-hull diagrams you post for the crew on passages include the centerboard conduit and all components such as sheave boxes and couplers. That way if one of the components should fail they will at least have chance to locate the problem and slow the ingress.

5 thoughts on “Centerboard Boat? How To Prevent Potentially Dangerous Leaks”