Le Saberage will soon be listed for sale!

Yes dear readers, it’s true. For those of you who are surprised to hear the news, a little background is in order. We bought Seb in 2014 as a cruising “test boat.” In other words, we bought her with the specific intention of only keeping her for a few years. Her mission was to help us gain long-range cruising & live-aboard experience to test our aptitude for the cruising lifestyle. Purchasing a “test boat” allowed us to defer the commitment to a larger, more expensive yacht until we had a fuller sense of what we were getting into. As such, we have always been mentally prepared for the day when we would list her for sale.

Since it takes on average 6-9 months to sell a brokerage sailboat, that day is almost upon us. However, before we engage a broker we wanted to make a blog / social media post to be sure no close friends would like first dibs. In a perfect world, we would keep her through this winter in Florida, then hand her over to her new owners in the spring. For anyone interested in buying her for cruising on the Chesapeake or New England, we’d be happy to deliver her north, since it means more time aboard her for us!

An interested buyer who would like to make an offer can buy her now or put a “hold” on Le Saberage by putting down some earnest money which buys the exclusive option to purchase her in the spring. In the event that no one steps forward, we plan to engage a broker this fall in the hope that the average time-on-market holds and we get our Florida winter in. But that becomes our gamble – she could sell very quickly. In either case our preference by far is to see her go to a close friend who already appreciates her legacy.

For those of you who are not familiar with the boat, here is her background: Le Saberage is a 1989 Sabre 42. She was sold new to an owner on the Great Lakes and spent the majority of her life up there. Her prior owners moved from the great lakes to the Chesapeake a few years before we bought her in the fall of 2014. She is a keel-centerboard design that draws 4’8” with the centerboard up and 8’6” with the board down.

Below, Le Saberage is pictured in Georgetown in the Bahamas, the furthest point south she has brought us. 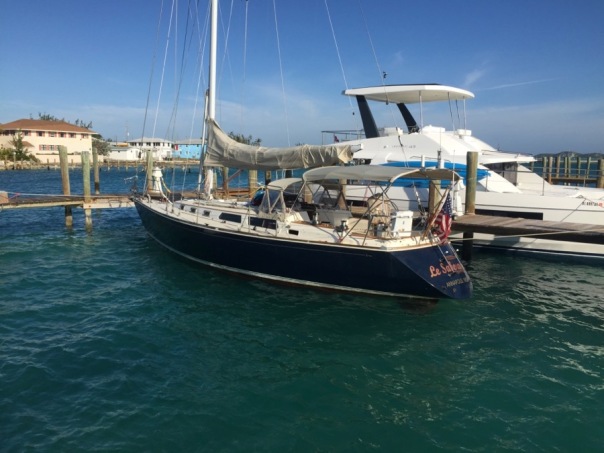 We have loved, loved, loved this boat. Ever since I was in college in the mid 1990s I wanted to one day own a Sabre because they are are widely regarded as perhaps the finest production sailboats ever to have been made. After college I bought and raced a J/29 and crewed aboard a variety of other race boats until 2014 when we decided to embark on this cruising adventure. When that time came it was a very short discussion to decide what brand and vintage of performance cruising sailboat we’d buy as our “test boat” for wider cruising ambitions.

There is a lot of hype in the world that seldom lives up to its ad copy. But oh my, does this boat. I remember trying to temper my expectations before I sailed her for the first time because I knew that decades of driving race boats might set some pretty unrealistic expectations for a performance-cruiser.

But I needn’t have worried. Pretty much from the first time we went close-hauled into a breeze I knew my instincts had been spot on about this boat. She is a joy to drive on any point of sail, with one of the most pleasant surprises found the first time we retracted the centerboard and sailed downwind with just main and jib. She slid along, light and free, and tracked beautifully. What a dream.

Below: Le Saberage on a daysail in Newport, Rhode Island. 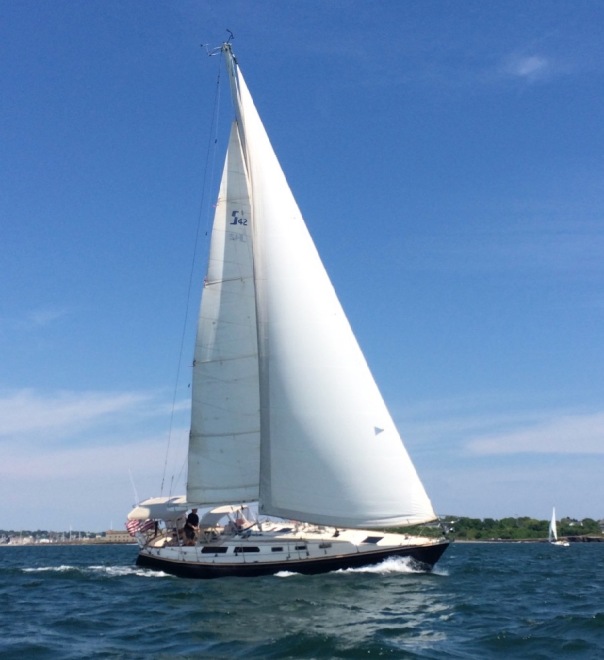 Below: video of Seb during a lively beat upwind from Annapolis to Rock Hall on the Chesapeake. With the centerboard extended to its full 8’6″ draft she makes quick and fun work of uphill passages like these … yet the board can be raised so she can tuck into shallow anchorages other yachts her size wouldn’t dare to enter. On this occasion that anchorage was cozy little Swan Creek, which we reached just in time to enjoy a rum-and-tonic sundowner at anchor before heading in to town for dinner. 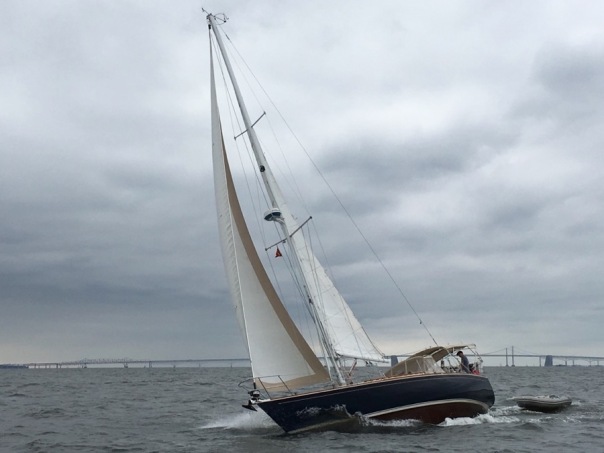 Below: a short video of an exhilarating beam reach to Cat Key just south of Bimini in the Bahamas. Note the use of a barber hauler, even though we were on a day cruise. Because … ex-racers.

Below: She performs beautifully under spinnaker. We found she has plenty of rudder for gusty broad reaches and tracks superbly. An asymmetric spinnaker can be tacked to the stem or a guy can be run to pole the tack aft a bit for deeper running. 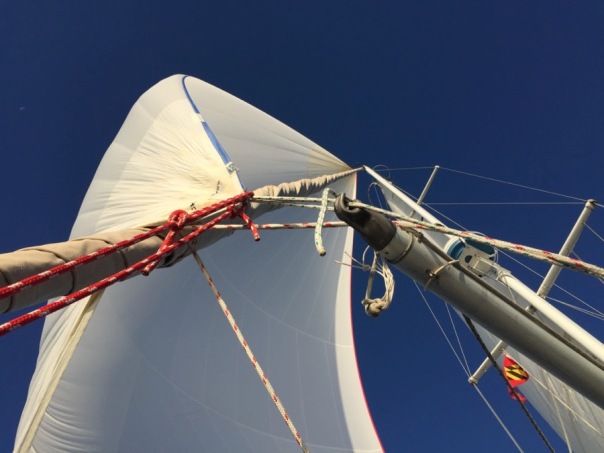 As with her sailing characteristics, Sabre’s workmanship aboard has met all of our expectations. We have lived aboard for months at a time between a summer in New England, cruises on the Chesapeake, our trip down the ICW, 5 weeks cruising the Bahamas, and most recently during her service as our part-time residence in Fort Lauderdale. In all of that time we have never tired of being coddled below decks just gazing at the teak joinery. 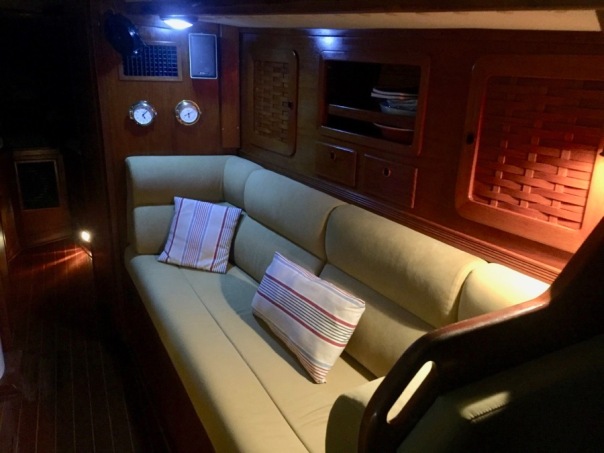 And the workmanship extends well past the aesthetic: Le Saberage’s is built like a brick house. Her sturdy (“stick-built”) construction has kept us safe, dry and comfortable in a wide range of conditions well offshore. Call me an old fuddy-duddy but they don’t make them like this anymore. Seriously.

Below, beam reaching to Tangier Island on the Chesapeake in a 20-25 knot westerly. I’ll admit I should have reefed a littler earlier but the way Seb is galloping along in the video may give the reader a sense of why I wasn’t ready to rein her in!

Below: the following day beating into the same 25 knot westerly departing Tangier. Sidenote: this design balances out beautifully in big breeze under jib alone. Canvassed as such she’s good on a true beat into the lower 30s. 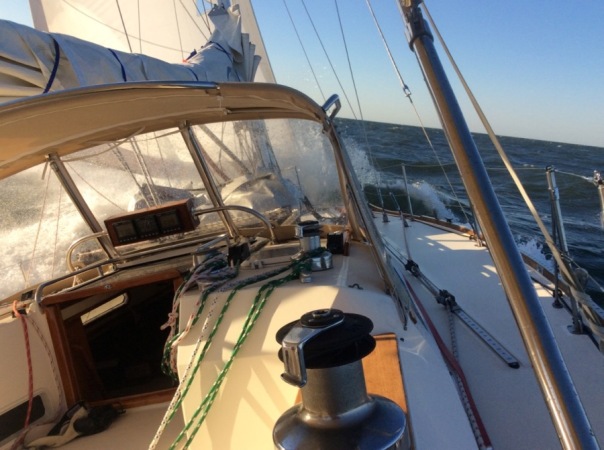 Below: in addition to solid construction, safety at sea is a function of safe, predictable handling in open ocean conditions. This video was shot during our downwind run in the Atlantic ocean heading northeast toward Block Island in the spring of 2015. Despite winds into the low 20s, Le Saberage was so light and easy running by the lee in a significant swell that the girls can be heard on the video casually chatting about their cell phone plans!

Those who know me personally are aware that I have an almost compulsive tendency to “gold plate” the things that I work on. Even though Seb was always intended to be a “test boat,” I lavished her with a complete restoration. I couldn’t help it. 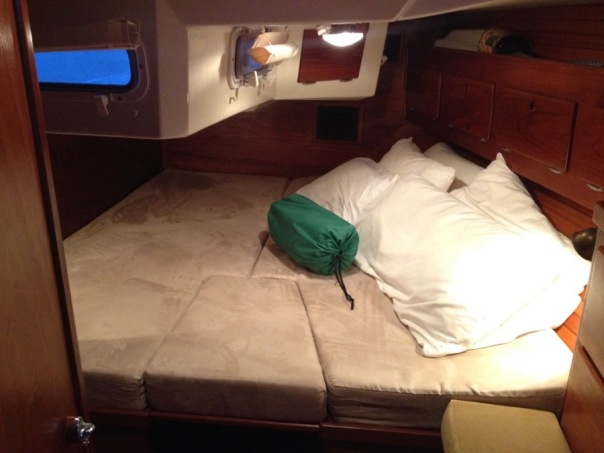 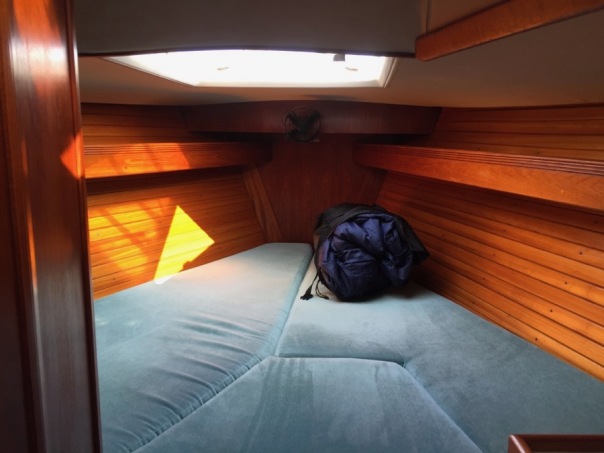 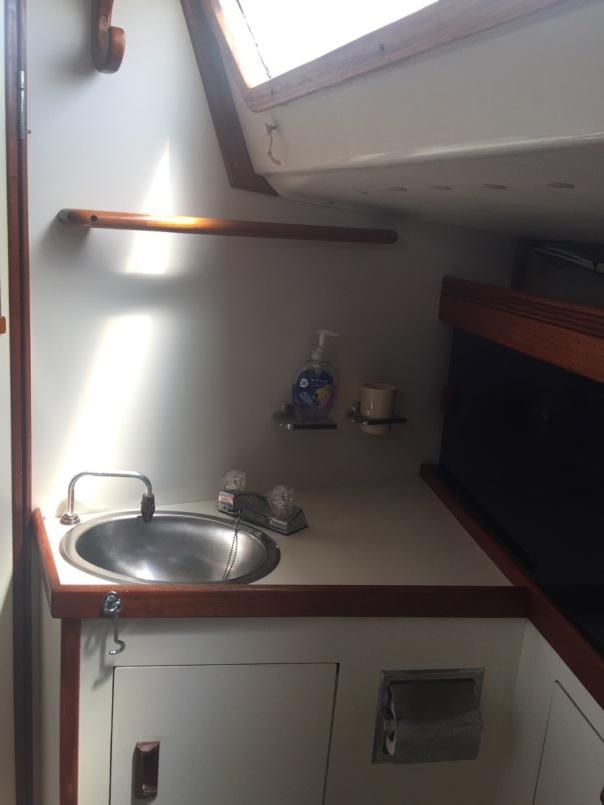 That was kind of silly me given our intended ownership tenure, but I am who I am and her next owner will be the one to benefit from my lack of self control. Below is the full list of recent upgrades, but it might be easier for me to just summarize things this way:

Seb is ready to go.

Whether you want to cruise locally, partake in extended cruises like we have, live aboard, or just day sail, she is ready. She doesn’t leak. She doesn’t break down. We spent all of our time and money focusing on the issues that would make her dry, safe, reliable and pleasant. It worked.

1 thought on “Le Saberage Will Soon Be For Sale!”