Alright readers! If you’ve ever anchored out in Annapolis for Blue Angels, the 4th of July, or Bands in the Sands, or if you’ve ever anchored … ummm …. anytime in the BVI, then you’ve no doubt seen some pretty heroically hair-brained stupidity by fellow captains trying to set or retrieve an anchor. Use the comments selection below (or PM me and I can post) and let’s see if we can select the winning story!

Just to kick things off, I’ll start with two stories: one I witnessed and one (because if you can’t laugh at yourself, you shouldn’t laugh at others) that I starred in!

My hands-down winner was Bands in the Sands a couple of years ago. We watched this group arrive in a center console on a very windy evening, dump the anchor over the side then immediately jump overboard and swim in to enjoy the concert. In the interim we saw all kinds of chaos with others trying to hold at anchor and several failing and dragging into other boats. Fortunately for the star of this show, the boat didn’t drag and some time later they came out and found it where they’d left it. So far, so good! Then they decided to weigh anchor, and their method of retrieval was to start both outboards and proceed to race the engines in reverse in the hopes that the anchor would somehow pop free. Evidently not understanding that this is the diametrical opposite of how anchors are designed to operate, they decided more force was needed, so our intrepid skipper gave the order for one of his crew to begin trying to run the windlass to haul the anchor in while he continued to race the outboards in reverse. What happened next was actually lucky: rather than pulling the windlass off the deck the windlass simply overheated, then popped it’s fuse, which resulted in a pretty hysterical declaration that “the anchor isn’t working!!!” and more bedlam among the crew. Top work!

OK, since we all had to learn somehow here was our own idiotic (but harmless) screw up. Almost 20 years ago Lisa and I thought that anchoring out in our J/29 would be a romantic way to celebrating her birthday. So we motored out of Back Creek and decided to anchor right off of the Naval Academy wall in a stout southerly breeze. Insert facepalm here. The J/29 is a light, wide little race boat that loves to sail at anchor (it wants to break its bonds whenever it can!), so it’s not the ideal cruising platform to begin with. 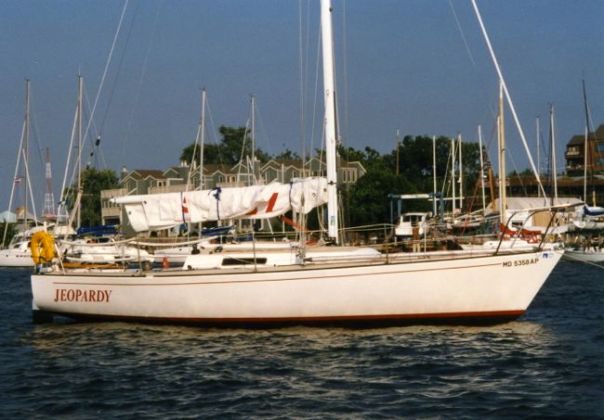 But in these conditions our choice of venue couldn’t have been worse. What followed was the most sleepless of sleepless nights I can ever remember. Jeopardy sailed back and forth in the gusts, healing over each time as waves rolled her too and fro. To make matters worse, the long fetch of the bay kicked up a spirited chop, and every wave bounced right off of the naval academy wall and came back to either roll us gunnel to gunnel a second time or, when Jeopardy was actually facing upwind between swings, pound the transom with a startling thud. We literally spent the entire night bracing ourselves so we didn’t roll clear off the settee we were sharing. The next morning we motored home totally dejected so we could get some sleep. Way to go! Anchoring a light little race boat in a totally exposed anchorage just off a lee shore in a stout breeze. Like I said, we all have to learn somehow!

Alright, got a story? Whether it’s yours or something you witnessed, let’s hear ’em!

3 thoughts on “Reader Poll! What Is The Dumbest Thing You’ve Seen A Crew Do When Anchoring?”