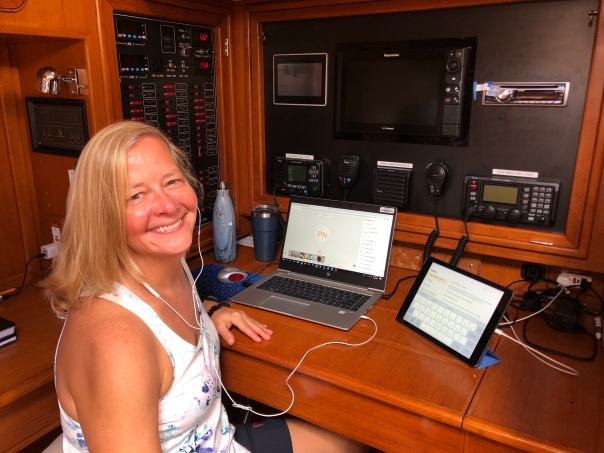 We bet a lot of you wonder how it’s going with three of the four of us working day jobs from the boat. It’s an interesting question because while I have been working from boats for long periods full time for several seasons between Rover and our prior boat, Le Saberage, those experiences were very different in that the boats tended to stay in one marina for weeks at a time, most often at a slip. That meant marina-supplied WiFi, electrical power supplied from the marina, and a known cell phone signal strength.

For our 2020 New England cruise, however,  two significant complications have emerged. First, we are actively cruising between different venues. That means we need to vet potential destinations using Active Captain to determine whether they have a strong cell phone signal with at least one of the cell phone vendors we use (Sprint, Verizon and T-Mobile) since our internet is 100% supplied by hotspots or cell phone tethering. Second, since we began the cruise one month ago this coming Saturday, we have been either anchored or on moorings 100% of the time. 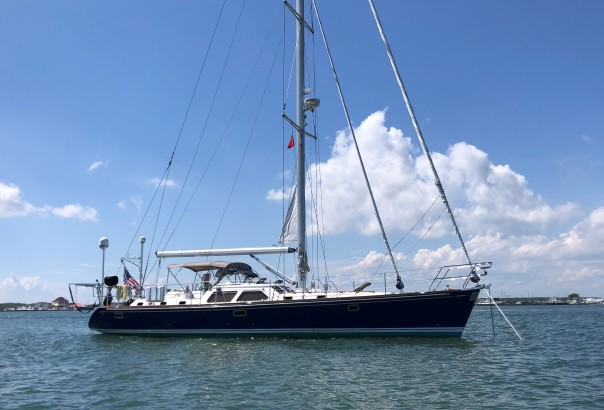 The implication? No marina WiFi is on offer, and all power consumed by our laptops, iPads, and cell phones comes from our diesel generator.

So you may be wondering “How’s it going?” In general, it’s been very good with only a couple of hiccups. Our record of choosing destinations with strong cell phone signals has been good right up until our current spot: Boston Harbor. This has been a surprise; we came here from being anchored for four days off of Provincetown on Cape Cod, right behind nothing more than a sand spit where we had an excellent signal. Go figure! Another significant hiccup: the original hotspot we bought for our T-Mobile sim card was an Alcatel that had a terrible habit of randomly locking up and crashing. It could not get brought back to life without having it’s battery removed to forcefully reboot it. Since it felt hot to the touch each time this happened, we thought the issue was related to the unit overheating, so we tried this innovative workaround: 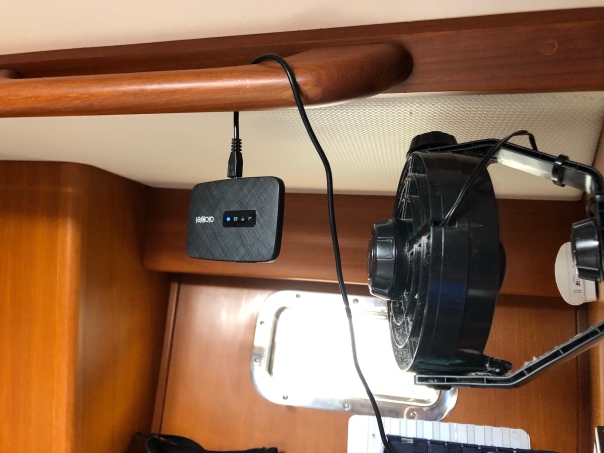 Alas, it crashed three times in a row during a critical conference call even though it was cool as a cucumber, so apparently the heat was generated by a software crash as opposed to the other way around. We replaced it yesterday with a T-Mobile branded hotspot and so far things are much smoother. 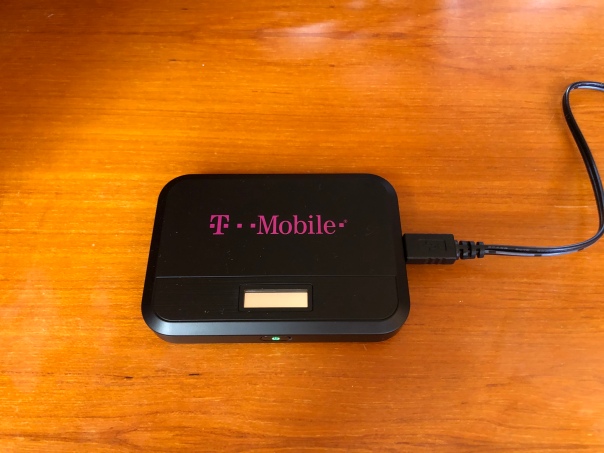 Here are some other questions we bet you may have and our answers:

Question: “How do you manage background noise if two or more of you need to be on phone calls at the same time?”

Answer : When this happens we break out into different staterooms aboard. For example, Brian fields his from the aft stateroom, while Lisa and I will use either the forward stateroom or (my personal favorite) our third stateroom up forward to port, which I have formally renamed to “the breakout room” in homage to such rooms found in (pre Covid) office buildings. We find innovate ways to set up  temporary workspaces in those rooms too: 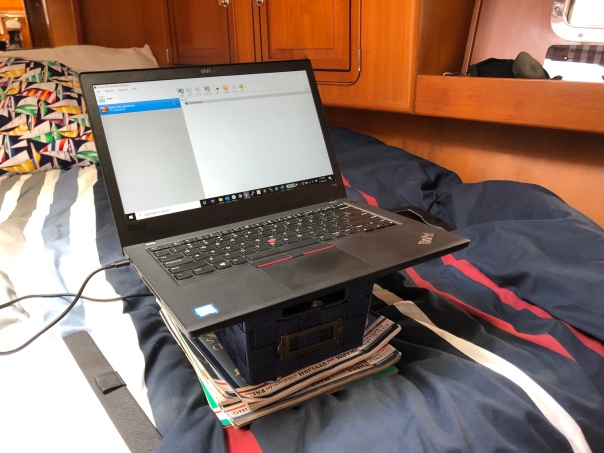 Question: “When do you work?”

Answer: Standard work days more or less 9-5 just as we would working from the house.

Question: “Does it suck to have to work instead of playing during the cruise?”

Answer: It can be nice to have a mix of both, but It can also suck when we are at a destination where there’s lots to do and we don’t feel we have enough hours in the day to work our day job, exercise to stay in shape, maintain the boat, prepare meals & clean up, and take in all the experiences at the same time. This is a dynamic we have some more work to do on moving forward. We want to concentrate more carefully on coordinating exactly what each destination has to offer and be sure we stay long enough to catch all of the ‘do not miss’ experiences at each. In a perfect world, I think we’d each work around half time during a cruise like this but given the life we’re living right now we’re not going to look this particular gift horse in the mouth!

Question: “Do hotspots give you enough internet bandwidth to host video calls such as Zoom?”

Answer:  When there is a strong signal, yes. We make sure to split up so that three of us aren’t on the same hotpsot at the same time. Using multiple cell providers means that we can move between them. For example, often Verizon has a better signal that T-Mobile or vice versa. Here in Boston, they are both weak but T-Mobile is much better than Verizon here for some reason. We also employ some workarounds like keeping our own video cameras off and dialing in to Zoom or Teams calls with our cell phones and joining the meetings with our laptops to see video, shared collateral, etc.

Question: “Are you really actually working this summer, or are you kinda just screwing around?”

Answer: We wish we could get away with that!  For example, I’m a finance consultant and I also “carry” a revenue number, so I simply couldn’t get away with screwing off for a few months. My compadres are in the same boat [do you see what I did there? Badabump! – ed].  Our jobs would end quickly and involuntarily if we didn’t have our butts in seats long enough to do real work.

Have other questions? Post them in the comments section below!

1 thought on ““You Work From The Boat Full Time? How’s That Going?””