This weekend we returned to Block Island with our good friends Erik and Shannon to see if we could broaden last week’s experiences with a bicycle tour of the interior of the island. We motored out Friday in a very weak breeze and enjoyed a leisurely afternoon and evening on the mooring followed by the obligatory drinks & dinner at The Oar.

Saturday we were delighted to find that the forecasters had gotten it wrong, with the predicted periodic rains and heavy winds morphing into a perfect day to explore the island by bike. The equipment was poor when compared to the rental cost, but the island’s incredible scenery made us forget everything else for several hours. If you ever get a chance to visit block island, make sure you make it past the bars to see what the island is really about. Block Island is one heavenly setting followed by another and as a natural spectacle is bested by none that I have seen so far this summer. 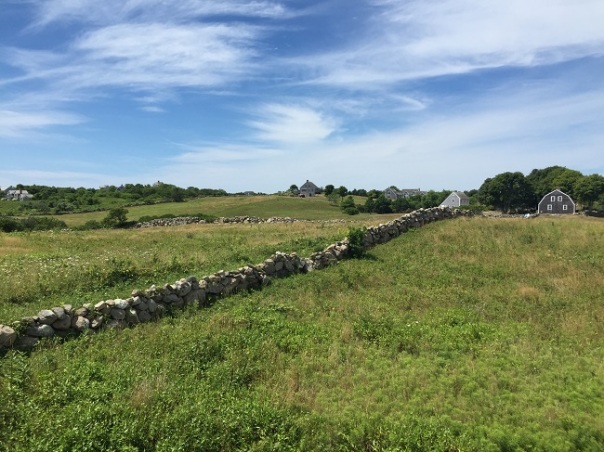 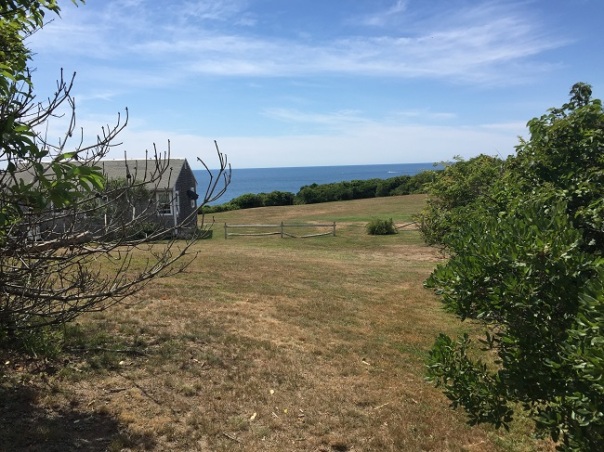 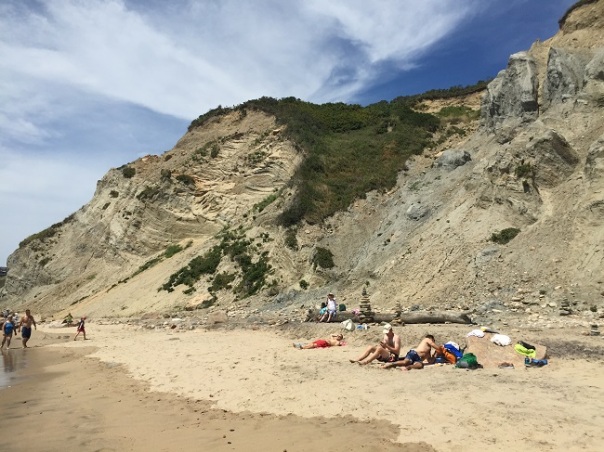 Sunday we were not delighted to find that the forecasters had again gotten it wrong, with the predicted 5-15 knot winds and clear skies morphing into periodic rains and strong winds of 20-25 knots from the northeast (exactly the direction we needed to travel).

Six hours of the toughest conditions we have yet faced aboard Le Saberage followed, during which we learned some new lessons.

First, this is a brick house of  a boat with excellent heavy weather handling. Leaving Block Island we had the current strongly with us, which made for a good pace but which also whipped up a steep chop. We took green water over the bow frequently, even all the way back to (and under) the dodger at one point. During that period a lot of water came on board the boat but were able to isolate the sources fairy quickly. The aft electric toilet was installed by a prior owner and is (we learned the hard way) prone to back-siphoning lots of sea water through the raw water intake hose. We saw a similar problem with the aft head sink drain and cured the leaks by closing both seacocks before embarking on a long process of trying to clear the bilge of many, many gallons of water that sloshed about and emerged from underneath the floor boards on the leeward side of the boat – not exactly a heartening sight! We also learned that the dorade vents all need to be removed completely and replaced with their deck plates in heavy weather after a couple of big green-water incidents soaked the leeward salon cushions. Fortunately, we carry the deck plates aboard for just such contingencies and the dorades were removed shortly thereafter.

Finally, we learned that the aft head foot pump faucet needs to be closed, or the boat will siphon water straight aft from the port water tank out that faucet in a big sea on port tack.

After an hour or two of sailing the tide turned against us, which had the desirable effect of reducing the sea state somewhat but which also slowed our progress considerably. Still, the protection from the land and currents meant we were in smoother seas the further north we progressed, though the wind kept us under reefed main and jib for the entirety of the trip and never really let up. By the end of the trip the showers had passed and bright sunshine was illuminating the Rhode Island coast line. We picked up a Newport mooring around 5PM, after having left Block Island at 11.

As I loaded Lisa and our guests onto the launch to make their evening flight, I commented to the launch driver that we’d just arrived from Block Island, and that I’d noticed almost no boats out as we arrived back at Newport. He hesitated a moment before answering, perhaps trying to gauge whether we were easily offended. Then he decided to risk it and say what he was thinking.

“The smart people stayed in today.”

I laughed, completed the departure hugs & kisses, then turned to a very long evening of cleaning and drying out the boat. Those smart people may have had a more comfortable day, but we’d gained valuable experience that will serve us well in the years to come and we had a hell of a lot of fun doing it.