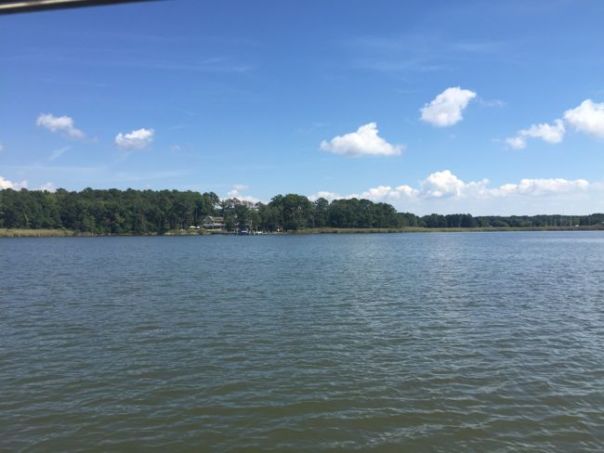 Before long, we’re going to be convinced that if we do this cruising thing long enough, we’ll have seen pretty much everything. This weekend we cancelled our planned overnight cruise to St. Michael’s in the face of forecasts of strong northerly winds for Sunday. Why choose a destination to the south that would cause us to beat our brains out coming back uphill to return home? Instead we decided to power north to Rock Hall for a return visit to the ridiculously picturesque anchorage in Swan Creek so we could be driven back downhill on Sunday. The Creek was absolutely everything we remember it being from our trip last year and rivaled many of our New England destinations on the bliss-o-meter. 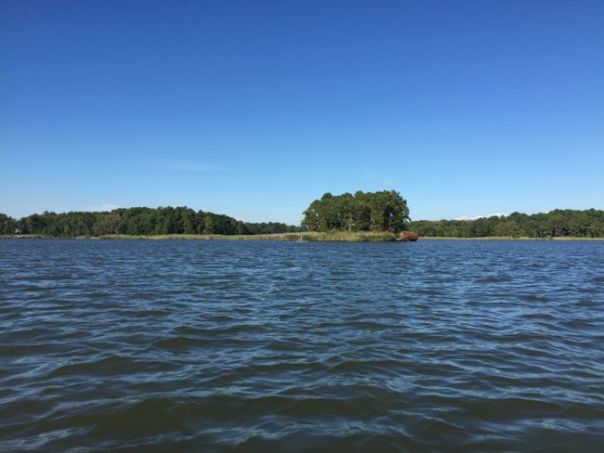 Photos can never quite capture how great a setting like this, and video can only come a bit closer.

The conditions Sunday morning had us convinced that we could expect the sleigh ride NOAA had promised us. We made pancakes and fried some eggs while listening to winds in the upper teens whistle through our rig. Saturday’s forecasts were confirmed over the VHF Sunday morning: winds 15-20 with gusts to 30. Small Craft Advisory through Monday morning. Woohoo! Let’s go surfing.

Forecasts. What can we say. The most challenging conditions we’ve yet faced in the Sabre came on the heels of a seriously whiffed Block Island Sound forecast for northerlies in the teens that turned out to be northerlies in the mid 20s with a driving rain. This time NOAA inverted their Block Island whiff: our promised 20-30 knot northerly devolved into a pleasant but altogether unremarkable broad reach home to Lake Ogelton with winds only in the upper teens.

As underwhelming as our Small Craft Advisory turned out to be, the weekend wasn’t without excitement. Sunday morning as I was getting the dinghy ready, I met a brightly colored little green frog that had sought refuge on the tiller our our outboard motor. I carefully relocated our new friend to another part of the dinghy and wished him safe travels for the ride home. (Editor’s note: he abandoned ship almost immediately after we weighed anchor.)

I was soon to meet the nemesis that may have driven him all the way from shore to our dinghy. As my anchor chain came up through the windless, the world’s luckiest (Ribbon?) snake wound around the outside of the chain and plopped onto the deck near my feet. How it avoided being ground to bits by the windlass or squashed by the anchor roller remains the thing of miracles, but the little Parseltongue was in no mood to take further gambles with his life and shot quickly into the anchor locker and down through the pile of chain.

With the anchor half way up and stiff winds looking to blow us south into the channel, I was in no position to hatch a plan for retrieving him, so I completed my chores and closed up the anchor locker. Theoretically there wasn’t a route out of the locker into the main cabin of the boat, so we’d consider him a drunk-tank jail bird for the ride back to Annapolis where we could deal with it from the mooring.

Once back in Lake Ogelton I saw that he’d emerged from the bottom of the chain pile during the trip, no doubt trying get his best Andy Dufresne on.

My efforts to coax him onto the end of a boat hook in the style of The Crocodile Hunter proved fruitless (perhaps I failed to utter, reassuringly, ‘you’re alright, mate!‘ quite the right way) and I soon found myself at a loss as to how I could extricate him in a way that didn’t end in a fatality for either of us. Then I struck up on an idea that wound up working like a charm (badda-bump!): I removed all of the chain from the locker, and then firmly guided him with the end of the boat hook toward the anchor locker drain. Sure enough: he fit right through and in just a moment his head emerged from the side of our hull and he jumped the remaining 2 feet down into Lake Ogelton. The last we saw of him, he was swimming quickly toward a neighboring catamaran.

Maybe he’d gotten a taste for the cruising life too. If so it would only be fair to warn him that it’s a jungle out there.

(badda bump again! Thanks everybody I’ll be here all week. Be sure to tip the wait staff!)